X-Ray Diffraction is widely considered as a major contributor to the development of the XX century chemistry. This status has been achieved in spite of the fact that the technique was used mostly for bulk phase analysis and crystal structure solution – neglecting principal processes of chemical reactions that have their origin e.g. at the solid-gas interface – at the surface . Up to now observation of surface interactions was possible only for internal surface of crystalline porous materials e.g. zeolites. Nowadays with availability of nanopowdered materials, the in-situ diffraction is able to offer a major breakthrough – when number of atoms at the surface is comparable to that of bulk atoms, we can directly detect elementary chemical processes at the surface. The challenging task is to interpret these observations. To this end a large scale atomistic simulations may offer a significant help. I believe that in close future a direct observation of the solid-gas interface via in-situ nanopowder diffraction will provide many surprises in the established picture of elementary chemical reactions.

The structural information can be accessed via powder diffraction of X-rays when applied to nanopowdered metal. The scattered intensity due to the interface region is only noticeable when the number of atoms on the metal surface contributes significantly to the overall number of metal atoms. This may be the case for nanopowders. Such small lumps of matter even when apparently crystalline, scatter X-rays in the way not obeying strictly the Bragg law. The terms coined by me are: “nanopowder diffraction” and  “diffraction beyond the Bragg law”. One thing is to detect the powder diffraction evolution on some surface process (chemical reaction, chemisorption, disordering etc.), the other is to interpret the observed changes in terms of structure. To this end already for some years I attempt to develop numerical modeling tools addressing experimentally observed processes and designed to be easily interfaced to the experiment.
On the other hand it appears that if designing a right scenario for the in situ structural process to study (employing such parameters as gas composition, temperature, pressure) the nanopowder diffraction alone may suffice in providing satisfactory structural model. 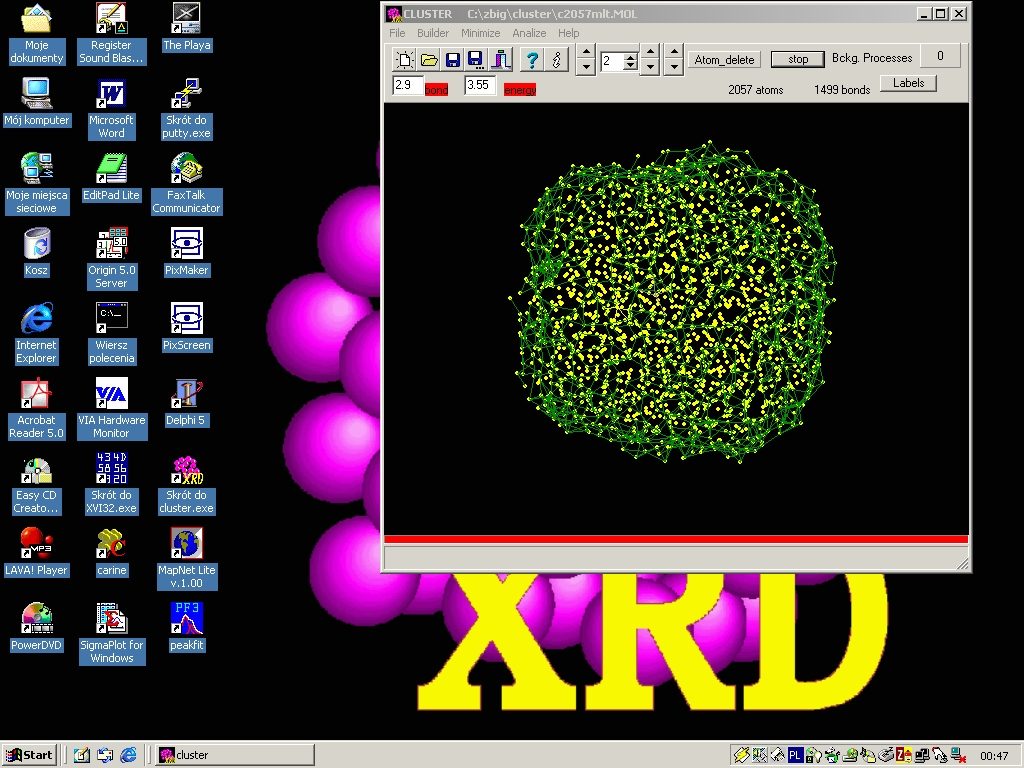 The principal tool developed to complement the in situ nanopowder diffraction experiment is CLUSTER – the building and simulation program with graphical interface.
Some illustration of the program potential is presented graphically on the following   slide show. The slide resolution is 1024×768. The slides show old version of the program written under Delphi (Windows). Current development bases on Lazarus Linux project and enables multiplatform compilation. The source code can be made available on request.
CLUSTER can be downloaded together with its environment from the main menu.  Short guide for configuration and few simple examples are also available.  For the moment there is no full manual for it and help is limited to scant hints. Works the best with resolution at least 1024×768.

The scope of the project was broadened to interpret the evolution of the structure of bimetallic nanoparticles in some chemical reaction conditions.

The importance of the project may be well understood bearing in mind that most processes of heterogeneous catalysis occur at the surface of metal nanoparticles finely dispersed on some more chemically inert support. Although many physical techniques has already been employed in catalysis to study such surface states and species, these are mostly spectroscopic and do not allow a direct structural insight in reaction conditions.
Some general philosophy of the project can be found in a popular article published in journal of Polish Academy of Science –“Akademia”.

The technique combined with in situ Transmission Electron Microscopy was used in the recently defended PhD Thesis “Structure dynamics of heterogeneous catalysts based on nanocrystalline gold in oxidation-reduction (REDOX) reactions”
PhD_Thesis_190701_2030_high-fidelity_final  by Maciej Zieliński. 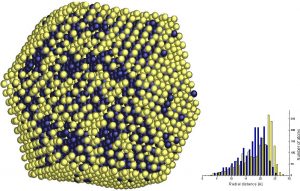 tom Au-Pd alloy  cluster was constrained to have its surface build up solely of Pd atoms. The analogous minimization leads now to a reversal of the segregation radial profile. Both energy relaxations used semi-empirical N-body Sutton-Chen potentials applicable to fcc metals.

Powder X-Ray Diffraction appears to be a sufficiently sensitive technique to register subtle structural changes at the nanocrystal surface provided the nanocrystalline peaks are measured with good statistics. The principal publications paving the way to understand surface restructuring due to chemical reactions are listed below: